The Prodigal Son: Repenting and Returning to the Father 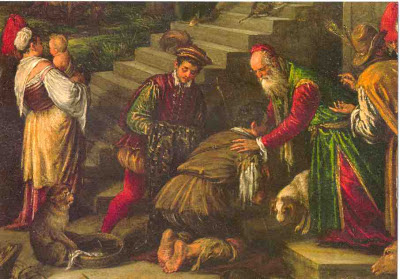 The story of the Prodigal Son (Luke 15:11-24) isn't preached much anymore, and there are some good reasons for that. The story, if you've forgotten it, is about a man with two sons, the elder son who was righteous and the younger one who left the path of righteousness, but later returned.

The unrighteous son demanded his part of the inheritance, and left his father and brother to live in another city. There, the prodigal son squandered it all in reckless living (prodigal, meaning one who spends recklessly.) Coming to his senses, he returned, humbly, to his father's house, and was welcomed back with open arms by his father, who rejoiced at his return.

The parable, of course, is about repentance and returning to our Heavenly Father, who will forgive all who turn back to Him. But the message contains elements that are rather damning ones for today’s Christians, and for whom the story contains some uncomfortable truths.

For many Christians today, the story goes like this: "The younger son continued to live recklessly, seeing no need to return to his father. Instead, he continually praised his father and his father’s son (his brother) by name every day to everyone who would listen, and felt that was enough. After all, he said, 'I'm not perfect, just forgiven.'"

While this is how many would like the story to end, it’s not how God, our Father, operates. He requires us to repent of our sinful actions.

Jesus was sent by his Father (who is also our Father) and we, the younger son, are being called to respond like the Prodigal Son did – with repentance and humility, returning to the Father and begging for forgiveness. God will forgive our sins, but we must first act upon His calling and His offer to receive us again with open arms. Without repentance, there is no forgiveness, nor is there eternal salvation.

Jesus was sent to call the Prodigals among us back to repentance. We are all called to plead on the Father’s behalf, urging the Prodigals to return to righteousness.

Jesus, who was chosen and adopted by God and sent out to be His spokesman and prophet, commanded us to be perfect, as our Heavenly Father is perfect. Jesus calls us to pursue righteousness, to do Good Works in the name of God, Whom we should love with our entire being, and to love and serve our neighbors exactly as we love ourselves.

We must take him at his word. He was not “joking” with us or teasing us as if we could never do what he commanded. We are literally being called to not live like the Prodigal Son, recklessly and without the need to do good and righteous Works.

We may not throw up our hands in despair, claiming we cannot do the Good Works and live the righteous life we are commanded to live, nor are we to vainly throw rags of praise at God while failing to seek the righteousness His Son calls us to seek.  That the older son in the story remained faithful to the father proves that one may indeed be righteous; a fact that shows that it can be done. Those who are not ill do not require a physician.

Jesus tells us that we are morally able to do Good Works, and that those among us who have become ill by living unrighteously need to seek a physician by returning to the Father.

There, in the house of the Father, we will be accepted with open arms.

And he said, “There was a man who had two sons. And the younger of them said to his father, ‘Father, give me the share of property that is coming to me.’ And he divided his property between them. Not many days later, the younger son gathered all he had and took a journey into a far country, and there he squandered his property in reckless living. And when he had spent everything, a severe famine arose in that country, and he began to be in need. So he went and hired himself out to one of the citizens of that country, who sent him into his fields to feed pigs. And he was longing to be fed with the pods that the pigs ate, and no one gave him anything.