Jesus’ Religion Is Meant To Be Lived! #JesusFollowers 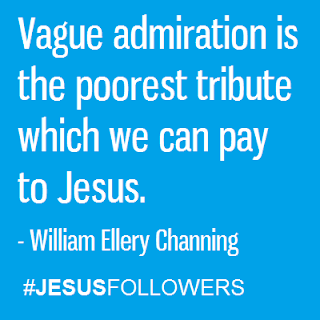 Christianity is not a mere code of laws, not an abstract system such as theologians frame. It is a living, embodied religion. It comes to us in a human form. It offers itself to our eyes as well as ears; it breathes, it moves in our sight. It is more than precept, it is example and action.

The importance of example, who does not understand? How much do most of us suffer from the presence, conversation, spirit of men of low minds by whom we are surrounded!

The temptation is strong to take as our standard the average character of the society in which we live, and to satisfy ourselves with decencies and attainments which secure to us among the multitude the name of respectable men.

On the other hand, there is a power (have you not felt it?) in the presence, conversation, and example of a person of strong principle and magnanimity, to lift us, at least for the moment, from our vulgar and tame habits of thought, and to kindle some generous aspirations after the excellence which we were made to attain.

I hardly need say to you that it is impossible to place ourselves under any influence of this nature so inspiring as the example of Jesus.

This introduces us to the highest order of virtues. This is fitted to awaken the whole mind.

Nothing has equal power to neutralize the coarse, selfish, and sensual influences amidst which we are plunged, to refine our conception of duty, and to reveal to us the perfection on which our hopes and most strenuous desires should habitually fasten.

There is one cause which has done much to defeat this good influence of Jesus’ character and example, and which ought to be exposed. It is this. Multitudes - I am afraid great multitudes - think of Jesus as a being to be admired rather than approached.

They have some vague conceptions of a glory in his nature and character which makes it presumption to think of proposing him as their standard. He is thrown so far from them that he does them little good.

Many feel that a close resemblance of Jesus is not to be expected; that this, like many other topics, may serve for declamation in the pulpit, but is utterly incapable of being reduced to practice.

This is an error which exerts a blighting influence on not a few minds.

Until men think of the religion and character of Jesus as truly applicable to them, as intended to be brought into continual operation, as what they must incorporate with their whole spiritual nature, they will derive little good from Jesus.

Men think, indeed, to honor Jesus when they place him so high as to discourage all effort to approach him. They really degrade him.

They do not understand his character; they throw a glare over it which hides its true features. This vague admiration is the poorest tribute which they can pay him.

(From “The Imitableness of Christ’s Character” by Rev. William Ellery Channing, in “Works” Vol. IV, 1888)