#Jesus: Anointed And Sent Out To Preach #JesusFollowers 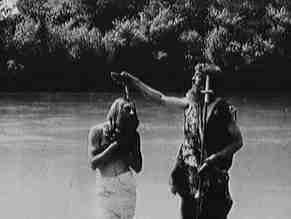 Jesus came into, and went out into, "the world," when, leaving the country around the Jordan River, he returned to Capernaum after the imprisonment of John, and began to teach in the synagogues and preach, saying, "Repent, for the Kingdom of Heaven is at hand."

In general it is to be observed, that "to come into the world," do not ordinarily, if ever, in the language of the New Testament, signify to be born, but publicly to assume the character of a divinely-appointed teacher: and "to be sent" signifies to be invested by God with this position, and to be begin an active mission to support it.

When this public mission came upon him, he says, "I came not of my own accord, but He [God] sent me." (John 8:42) And says, "The Son of man came not to be served, but to serve." (Matt. 20:28) These words cannot either with propriety or truth be referred to his entrance into life, for he did come at birth to serve others, and did not anoint himself to this mission, and certainly not as a baby.

Here he is proposing an example to his disciples, and appeals to the knowledge they had of his conduct among them, from his first entrance on his ministry at the age of 30.

He did not make disciples for his own sake, but for theirs; he came not out into towns of Judea to be served by them, but to serve them, and was hereafter to carry his services so far, as even to lay down his life in their behalf.

Jesus, speaking of himself, says, "him whom the Father has consecrated and sent into the world." (John 10:36) He was first consecrated, when "God anointed Jesus of Nazareth," says Peter, "with the holy Spirit and with power," to go about doing good. (Acts 10:38)

At the baptism of Jesus, God was heard to say of Jesus, "you are my Beloved son, in whom I am well pleased." (Luke 3:22) And an old reading of this same verse reads, "You are my son, today I have begotten you [become your father]," echoing Psalm 2:7 (and Hebrews 1:5) Both versions testify to his anointing for his mission at his baptism.

Thus this man was set apart, consecrated to his office, and qualified to discharge it, and then was commissioned to go out into the world to execute this mission. According to our Master's own words, he "came into the world" only after his baptism, at which God's holy Spirit descended upon him, and not before.

After they had been fully instructed in things about to the kingdom of God, he sent them out unto all nations to preach to others the doctrine he had delivered to them.

When he says of himself, therefore, that God "sent him into the world," since he was sent by the Father, as they were sent by him, he speaks of the authority with which he was invested, of the command that had been given him to publish to the world the doctrine which he had himself received from the Father.

The spirit was not poured out on Jesus, he was not in vested with divine authority and power, thus qualified to execute the will of God and sent out into the world, to take vengeance on them for their sins; but to impart to them, at the expense of all worldly comforts, and, in the end, of life itself, the most consolatory and the most salutary doctrine, the belief and the obedience of which will entitle them unto eternal life.

Is it an advantage that such a great example should was held up to our imitation? Definitely. Would not any person, who aspires to perfect virtue, wish that a perfect model of it should be placed before them, to illustrate and recommend its maxims and its precepts, to guide and to encourage, to animate desires, to invigorate endeavors, and to excite emulation?

We see what, if he had continued in obscurity, we could not have seen in him that our duty is in every instance practicable; that virtue is in every condition possible, and abounds with such comforts as can make any circumstances tolerable.

By this means we have the instructions, and encouragements, and incitements, that are contained in his example, who was in all points tempted as we are, and yet was without sin. We may be pure in heart, we may be holy in all manner of conversation; we may have the same mind that was in Jesus; we may walk as he also walked; we may be like God, and acceptable to him; ever growing in his likeness and his friendship. To what dignity, to what comforts of the Gospel of Jesus may we achieve! How good is God! How great a gift is Jesus!