A Faith in Jesus That Challenges Us to Be Better 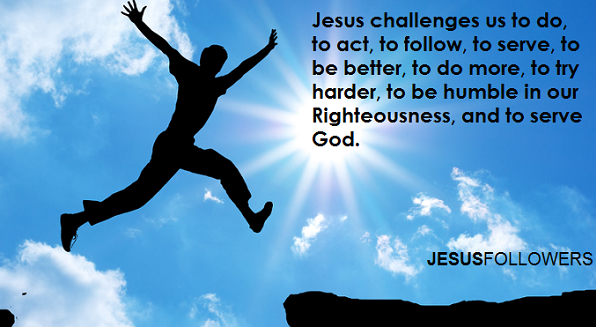 A couple years ago, a young man named Jefferson Bethke posted a video on YouTube and later followed it up with a book, “Jesus [is greater than] Religion: Why He Is So Much Better Than Trying Harder, Doing More, and Being Good Enough.” He was wrong on all counts.

Picking up a cross, going the extra mile, expanding our 'talents' to serve others, and being the Good Samaritan cannot mean a life of leisure and ease. It's a call to action. If we say we love Jesus, but don't hear what he says, we've built our lives on shifting sands, not the Rock of his Words.

The Gospel of Jesus isn't to only have belief in him, but to serve God, to follow Jesus, to love others just as we love ourselves. His Gospel calls us to serve and act, not sit and contemplate, nor to simply admire Jesus or even to worship him.

Let there be no mistake: We are equipped from birth by God to begin the works Jesus calls us to accomplish. We have the ability to serve others, the ability to recognize Truth, and the ability to know right from wrong. When we repent of our sins, and commit to stop sinning and serve God, then our Heavenly Father will equip us further with wisdom, with hope, with courage and with the strength to endure anything.

If we fail to grasp the simple, clear and profound message of Jesus, we will have fallen prey to the error of the past 19 centuries - the easy and wide path that leads to a failed and worthless faith, rather than a fulfilling one that fills the world with love, hope and light.

Anyone calling us to a faith of easy belief, of faith without Works, of emotion without action, of a hope of Heavenly rewards without our hands engaged in helping others, is calling us to "another Gospel" that is false, and "another Christ" who is a false illusion.