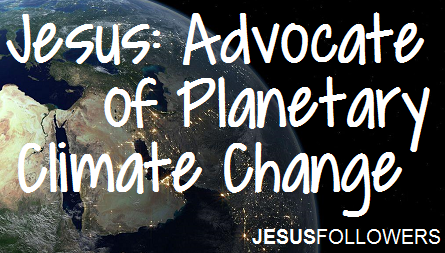 Jesus was one of history's strongest advocates for Climate Change. It's true!

At a time when Israel was occupied by Roman soldiers on behalf of a world-conquering empire, Jesus called on all who heard him to change the climate by loving their enemies (the Romans) and if they forced them to carry their packs a mile, they should "go another mile with them."

At a time when people were focused on extremely detailed rule-following as a sign of religious observance, Jesus called on his hearers to not only follow the LETTER of the Moral Laws Moses had proscribed for them (don't commit adultery, don't commit murder, don't swear falsely) but also more deeply follow the SPIRIT of those laws (don't lust after others, don't hate our brothers and sisters, let our thoughts and words be pure and honest.)

Jesus called on people to deny themselves, at a time when such a thing was unheard of in the society in which he grew up. To serve others and love God completely, to deny yourself, to take up a 'cross,' and to take on a 'yoke' of obedience - these things were revolutionary, and remain so today.

Jesus said we can be perfect, and spiritually complete and mature. He called on people to serve God in spirit and in Truth, and showed by example that IT CAN BE DONE by a human being! His challenge to those who heard him was to be more righteous in our acts than the Pharisees - whom many believed to be the holiest people in the world - was likely met with shock and gasps. That they followed rituals purely was true, but many didn't have spiritual hearts that led them to truly holy outward actions.

No, Jesus called on them, as he calls on us today, to change the spiritual climate of their age - to usher in God's Kingdom, the Kingdom of Heaven - through their daily actions, making it a reality on the earth RIGHT NOW. We are not called to wait, to blame God, to blame our human weaknesses, to claim God has not given us the ability to obey Him, or to pretend our individual actions cannot make a difference.

The political and social climate will take care of themselves, and we can't change them easily on our own. And while we can all treat the Earth better (since it belongs to God, not to us) we cannot on our own change the earth's climate.

But we are called by Jesus - the one whom God chose and sent to be His spokesman and our Master and example - to rise to the challenges he calls on us to accept if we claim we are his disciples.

One by one, day by day, we each change the spiritual climate around us and bring in the Kingdom of God, as we live as Jesus commands us to do.
Posted by Stephen at 8:30 AM