Not "Faith Alone" or "Works Alone" but "GOD Alone" 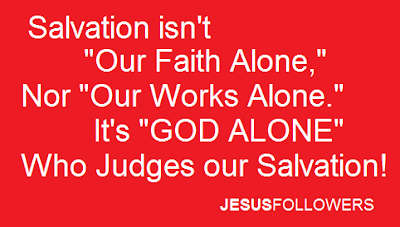 Many - perhaps the vast majority - of Christians beliefs about salvation are like a certain student on her first visit to the admissions office of a university. Picking up a college catalog, she randomly opens it to the end, and, seeing that at the end of the fourth year, she would be rewarded a diploma, she mistakenly assumes she does not need to do any other work, or attend any classes.

So, ignoring the requirements for earning that diploma in the part of the catalog containing the coursework, she demanded her degree on the first day of  college.

In the same way, a man was hired at a new job. Once hired, the employee, knowing he will be getting a huge salary at the end of every month, somehow convinces himself that any WORK he does will be incidental to that salary.

Each day, he assures himself that he WILL be paid, but that he cannot possibly EARN such a good salary, but instead views it as a "free gift," given to him because he was hired to work at the company. Any WORK he does, he says, will be merely "evidence" that he has a job.

This hypothetical student, and the employee, are both in for a surprise when told how universities and workplaces actually work. And many pastors' flocks may be surprised to learn that Jesus did NOT teach that our Creator makes no demands upon us in this life, and instead, that God will actually judge us according to our Works in the next.

Simply enrolling in a College doesn't permit us to view ourselves as graduates, and being hired doesn't mean our employers hired us to warm a seat in exchange for a cash "gift" at the end of the pay period.

In truth, belief - in Jesus' plan of repentance and righteousness, not just "on" him - is only a first step in our Faith. Simply professing belief, without accompanying it with active Good Works, is not enough (James 2:19.)

Jesus, in the only time he was asked how one achieves eternal life, answered, "You know the commandments: 'Do not murder, Do not commit adultery, Do not steal, Do not bear false witness, Do not defraud, Honor your father and mother.'" (Mark 10:17-19) Those who condemn "commandment keeping" have a real and serious problem with Jesus, who believes the way to achieve eternal life is keeping God's moral law, just as all the Prophets have said.

Jesus calls us to seek the righteousness of God's Kingdom, to make that Kingdom "on earth as it is in heaven" to seeking heavenly treasures instead of earthly ones, and to do "good works" so that others may know of what this Kingdom is composed.

Belief alone, without seeking this Kingdom, and without performing these Good Works, is not the Gospel preached by Jesus.

Nor can we have "faith alone" without works. That is also not part of the Gospel message of Jesus.

"Faith alone" as a phrase, appears just once in the New Testament writings, and then, it is spoken of in the negative. "You see that a person is justified by works and not by faith alone." (James 2:24)

Nor, it must be said, can we have WORKS ALONE without Faith, because our Faith is based on the teachings and example of Jesus, and without faith in Jesus and following him and abiding in his words, carrying his cross and his message in our hearts daily, we have no idea what "works" to do, nor how to do them.

So, let's not pretend the Bible's Prophets, including Jesus, gave us no "coursework" and no work from our "Boss," God, our Father.

We must strive to enter the "narrow door" of Salvation (Luke 13:24) humbly allowing GOD ALONE to be our ONLY judge of worthiness, just as the student will be judged - not by herself, or her fellow students, but by her professors and university administrators; and the employee's work performance will be judged by his boss.
Posted by Stephen at 8:30 AM