Hearing, And Doing, IS Our Salvation #JesusFollowers 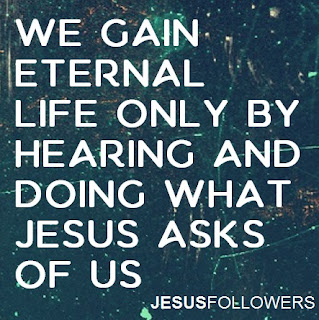 "Everyone then who hears these words of mine and does them will be like a wise man who built his house on the rock.  And the rain fell, and the floods came, and the winds blew and beat on that house, but it did not fall, because it had been founded on the rock." (Matt. 7:24-25)

Here in Jesus’ words we see what that rock really is which is a Christian’s security in the day of his trial; namely, the attending to and following the advice and counsel that Jesus had given in the Sermon on the Mount, and doing what he had been recommending us to practice.

Jesus had been recommending to his audience the practice of moral virtue, or the conforming men’s attitudes and actions to that law or rule of action which is founded in the reason of things.

It is both hearing these sayings of Jesus AND doing them, which is (in Jesus' words) building upon a rock, and which is a Christian's ONLY security in the day of his judgement.

It is not professing Jesus, nor calling him Lord, nor giving him the highest praises, nor is it an “orthodox faith” or its creeds, nor is it assenting to mysteries and unintelligible propositions, that are the rock a Christian may safely and securely build upon.

It is to have our minds possessed with those virtuous qualities, and our lives adorned with those worthy and virtuous actions that Jesus in the preceding Sermon [on the Mount] had been recommending, which alone can afford a just ground of hope and comfort.

Our Master goes on in verse 26: “And everyone who hears these words of mine and does not do them will be like a foolish man who built his house on the sand.”

Here we see what folly and madness it is for a person to make anything besides hearing these sayings of Jesus and doing them (or the practice of moral virtue) the ground of his confidence; because anything, and everything short of this would be like building a house upon the sand, which when the rain descended, and the floods came, and the winds blew, and beat upon it, it would fall, and great would be the fall of it.

It is the doing or not doing what Jesus requires, which is the ground of our safety or danger; and this is the test by which we shall be judged, according to Christ's own words.

The Gospel are to become a principle of action in the believer, and rightly direct their mind and life.

But our Master makes the case still plainer, if such a thing is necessary, in his answer to the man's question, Matthew 19:16. “What good thing shall I do that I may have eternal life?” This was a plain and a fair question. And the answer which Jesus returned to this important question was, “If you want to enter into life, keep the commandments.”

This answer was as plain and full as the case required. The only ground of divine acceptance, that which renders us pleasing and acceptable to God, and which secures to them the happiness of another world, is keeping the commandments.

From all which it is most evident that by the Commandments Jesus means the moral law, or that rule of action which is founded in the reason of things; and which therefore every rational being ought to direct his behavior by, and whoever makes this law the measure of his actions shall have everlasting life.

Here again we see Jesus declare that the way to eternal life, or the true grounds of divine acceptance is to keep the Commandments, by loving God and our neighbor, which is nothing else but conforming our minds and lives to that rule of action which is founded in the reason of things.

The questions which were put to him were of the highest importance to us all, namely, what we should do that we might obtain eternal life; and he was sent out into the world that he might be a safe guide to us in this very issue, and has given us a full and true answer to those questions, plainly declaring all that was necessary for us to know and do in order to obtain eternal life.

We may depend upon it that the keeping the Commandments, or the governing our minds and lives by that rule of action which is founded in the reason of things will most certainly render us pleasing and acceptable to God, and secure to us the happiness of another world.

(Adapted from "The Gospel of Christ Asserted," by Thomas Chubb, 1738)