The Happiness and Security of Virtue #JesusFollowers 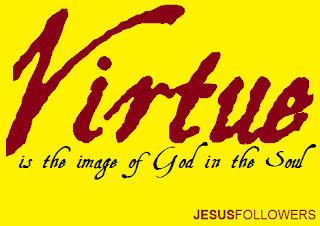 That our happiness hereafter depends on our conduct here is certain, because we find, in our present state, that the happiness of every successive period of human life is made to depend, in a great measure, on our conduct in the preceding periods.

The happiness of mature life depends on the habits acquired and the pains taken in early life; and mature life spent in folly and vice generally makes a miserable old age.

All we observe of the Government of the Deity, and all that we can learn with respect to His character, leads us to believe that He must approve righteousness and hate wickedness: and in the same proportion that He does this, He must favor the one and disapprove of the other.

To act righteously is to act like God. It is to promote the order of His creation. It is to go into His constitution of nature. It is to follow that conscience which he has given us to be the guide of our conduct. It must, therefore, be the likeliest way to arrive at happiness, and to guard against misery under His government. The accountability of our natures, and our necessary perceptions of excellence and good desert in virtue, demonstrate this.

The practice of virtue is, in this case, our security. It is the image of the Deity in our souls; and what we ought to depend upon is, that nothing wrong will ever happen to it. Let us then adhere to it in all events.

Walking uprightly will add to our present comfort, at the same time that it will preserve us from future danger. What is required of us, in this instance, is only to part with our follies and diseases; and to make ourselves happy now, in order to be safe forever.

This would have been to establish an inconsistency in the frame of nature; and acting in a manner which cannot be supposed of that supreme power, which, in every other part of nature, has discovered higher wisdom than we are able to comprehend.

Our highest powers are, undoubtedly, our sense of moral excellence, the principle of reason and reflection, benevolence to our fellow-creatures, and the love of the Deity. To practice virtue is to act in conformity to these powers.

(Adapted from a message by Rev. Richard Price)
Posted by Stephen at 8:30 AM