What More Are We Doing Than Others? #JesusFollowers 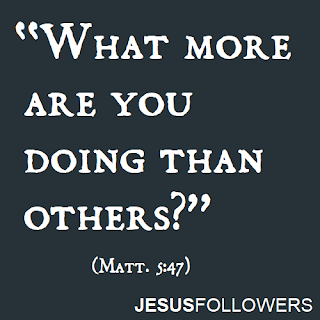 The discourse of our Master of which these words are a part was addressed to his first followers, and especially those who were afterwards Apostles, and preachers of the gospel.

In it, he explains what was their proper character, their station, and their duty; setting them in as striking a light as possible. "You," he says, "are the salt of the earth, the light of the world, and a city set upon a hill."

They were to be the public instructors of mankind, ambassadors, as it were, from God, sent by him for the great purpose of persuading a sinful world to abandon their vices, and sinful customs, and to devote themselves to a life of virtue, with a view towards a happy immortality.

And in what ways our Master’s disciples should seek to outdo others, he tells them; and the instances he mentions are indeed most worthy of our ambition. Namely, to strive to carry the generous virtues of benevolence, forgiveness of injuries, and the desire to live useful lives, to the greatest height.

He says, “You have heard that it was said, ‘You shall love your neighbor and hate your enemy.’ But I say to you: Love your enemies and pray for those who persecute you.” And as an incentive to a virtue so seemingly above humanity, he annexes this noble motive, “so that you may be sons of your Father who is in heaven. For he makes his sun rise on the evil and on the good, and sends rain on the just and on the unjust.”

Pursuing the same argument, he adds, “For if you love those who love you, what reward do you have? Do not even the tax collectors do the same? And if you greet only your brothers, what more are you doing than others? Do not even the Gentiles do the same? You therefore must be perfect, as your heavenly Father is perfect.”

To act in this manner with such true greatness of mind, and disinterested benevolence, is to act the part that the almighty and infinitely benevolent maker of all things continually acts, it is to be as the sons of God, doing the work of our heavenly father.

Could a nobler principle or a nobler cause of action be proposed to mankind or could they be enforced by a more powerful and worthy motive.

To be governed by these principles, and to act in this manner is to approach as near to the sentiments and conduct of Divinity, as is permitted to mortals.

The religion of Christ lays us under obligation to live as he did, to resemble him in the temper our minds, and the course of our conduct, to obey his commands, and to copy his example, is to confess him before men, and such only as confess him in this manner, will he confess, and acknowledge to be his, before his heavenly Father.

Are we trained up in the sound belief that nothing but a good heart and an exemplary life are pleasing to Almighty God, and will recommend us to his favor and acceptance? Is this our faith?

The end [goal] of all knowledge is practice, and it would ill become us to show the zeal that we do by forming ourselves into separate societies, and being at the expense of supporting them, by which we hold out to the world our idea of their importance, if we thought they were merely matters of speculation, and had no connection with moral duty.

Let our lives be as pure, as our sentiments, equally worthy of God and of Christ Jesus, and we shall be indeed the light. of the world, the salt of the earth, and a city that is set upon a hill.

Let us not be ashamed of our good confession. I trust we are bearing a public testimony in favor of the purity of. the worship of the one true God, amidst a corrupt and idolatrous generation.

Let all those persons who are possessed of whatever themselves and the world consider as advantages, ask themselves what they do more than others, who are lacking them.

Better for us to be poor, than to be rich and not generous; to be fools, than to be knaves; and to have been taught nothing at all, than to make a bad use of superior knowledge. It would have been better for us never to have heard of Christ than to be Christians in name only, and not in deed and in truth.

(Adapted from a sermon by Dr. Joseph Priestley, “On the Necessity of Self-Examination,” 1805)
Posted by Stephen at 9:30 AM