For What Cause Do We Advocate? #JesusFollowers 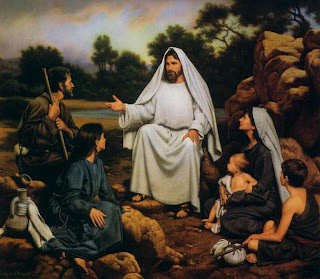 Now it has been nearly two thousand years since Jesus Christ, the Messiah of the Jewish nation, appeared in the world under the sanction of Divine Authority.

The history of his life is made up of a uniform and unbroken series of virtuous exertions, “he went about doing good to the souls and bodies of men,” and it attracted the admiration of the world by the dignity of his temper and the charities of his heart.

Piety to God and benevolence to man were the first principles of his conduct; these, if we may so speak, were the maxims upon which he set out, from which he never swerved, and which he exhibited in a most wonderful and extraordinary manner.

He instructed his disciples in the spirit and design of his religion, and he fell a victim to the malice of the Judeans, and thus sealed his testimony by the shedding of his blood.

This was the faith of Jesus Christ: When asked by a scribe which was the first commandment, he singled out from the whole body of the Law the belief in one God; and what is more worthy of our attention, is this, that though he frequently and unreservedly censured the ceremonial corruptions of the Judeans’ religion, and condemned their traditions as derogatory from the designs of the Mosaic economy, yet on this one subject he bore testimony to their consistency and fidelity, and declared, that in this point of view, "he came not to destroy the law but to fulfil."

In the course of his instructions he uniformly alluded to and taught the same doctrine, evidently to the exclusion of his own person, and that of the Holy Ghost: he denied the accusations of the Judeans when they represented him as assuming the title of God; he constantly referred his authority, his power, his plan of man's salvation, to God the Father; he prayed to Him, taught others to pray to Him, and Him alone; and ascended to heaven with an attestation of this divine truth on his lips, “I ascend to my Father and your Father, to my God and your God.”

After his death, we find his disciples, who previous to this period, had betrayed no uncommon portion of human frailty, acting the part of the most determined and courageous men, opposing “through evil and good report,” the corruptions of Judaism; travelling into foreign countries with the glad tidings of salvation, and, in imitation of their Master, giving up their lives rather than sacrifice their integrity.

For what is the cause we, today, are called to advocate? It is the cause of his religion; of simple, pure, and undefiled religion. The religion whose truths are founded on the existence of a Supreme Being, whose principles are corroborated by reason and revelation, and whose influences sympathize with the best affections and the purest feelings of the human soul — “that there is one God, and besides him no other"? - the Father, the Redeemer, the Judge of his creatures.

These are the principles we profess, the cause we advocate; and with such professions, however inadequate to the end in view our exertions may appear, “He who does what seems him best in the kingdoms of men,” will approve our work and bless our labors.

Ages rolled on and corruptions increased, centuries passed away, and the religion of Jesus spread, but it spread alas! in a spurious form, in a heathen clothes — it retained the name, but the spirit of its author had fled - it

reared its head' on thrones and in kingly palaces, but the poor sincere disciple who had formerly graced it by his virtues, was now transformed into the superstitious monk or the ignorant slave.

It is appropriate to bring the discussion to today, for one object of our faith is to restore to the religion of Jesus the same prominence in modern preaching that his teachings had in the preaching of the apostles. An erroneous theology has diminished the obvious and peculiar importance of his teachings.

(Adapted from a sermon by Rev. Charles Valentine, 1822)