The Piety and Example of #Jesus. #JesusFollowers 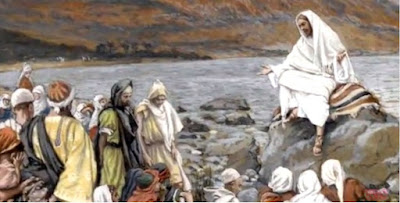 The effectiveness of teaching by example has always been known. In order to have the right notions of our duty, it is important not only that principles be laid down for our direction, but that we are shown how they’re to be applied to our character and conduct.

And when an example is presented in a light which interests, there will be awakened an involuntary feeling of emulation, a desire of resembling the character which we are taught to admire and love.

In this view, the life of our savior, Jesus, is the key part of the moral system of the Gospel. He came to be the example as well as the teacher of human beings. In order to become this, it was necessary that he should be placed in situations like ours; that, bearing the infirmities of our nature, encompassed by our needs, and exposed to our temptations, he might mark out by his own conduct the course in which we should all walk through trial, difficulty, and danger.

And his condition in the world was indeed like that of a common man, though it was one of extreme exposure and suffering. We may follow him like a brother in frailty, and danger, and trouble, from the manger where his infancy was laid, to the tomb where he slept to be troubled no more.

He was tried like us, by hunger and thirst, and then by festivals and feasts. He was persecuted by enemies, then surrounded by affectionate friends. Sometimes he was insulted and reviled, sometimes was received with shouts of joy, and eagerly followed by multitudes who would raise him to earthly power.

Same in nature, though not in degree, with those of our life; like these are the occasions on which we are commonly called to show the strength of our regard to God, and the sincerity of our dispositions to serve him. While our situations of trial distantly resemble his, the way in which our savior lived presents a pattern for our imitation this is both perfect and attainable.

This view of Jesus’ character, as one of common life, as one which we may imitate and resemble is important. I hope, that by dwelling on a few of the modes in which his piety expressed itself, we may better know our own duties.

In the second place, his piety was shown by his referring all his own powers to the Father, and considering all as derived from Him.

He continually assures us that he "came not of himself," and that “the Father sent him;" thus attributing all his benefits to God. He particularly attributes all the parts of his moral system to God.

If he speaks of the religion of mercy which he had come to dispense, he points us to God as its author. “The words which I speak, I speak not of myself; ” and "my doctrine is not mine, but His Who sent me;" and “as the Father hath taught me, I speak these things.”

The same feeling of dependence, the same grateful sense of God's goodness, we ought to exercise. All our blessings, like all his, flow from God. As God invested Jesus with all powers necessary for his undertaking, so He has given to us all the ability which we need to accomplish the work given us to do.

We see the piety of our savior when he seeks the direction and aid of God, when occasions of great importance occurred. The night before his disciples were chosen, he was in prayer. And it was natural, therefore, that before he selected them, he should commend the interests of his religion to God.

Finally, the piety of our savior was greatly shown in his sufferings. You cannot fail to remember the meekness with which he bore so many insults, the patience with which he endured the severest pains, the submission with which he passed through agony and death.

Sufferings come to us all, though they may be small when compared with his. There are disappointments which will destroy our best laid plans, there are pains and sickness to be endured, friends that we lose, and of course, a final hour of agony to be passed through. We should now prepare for these trials by acquiring a spirit of piety; by forming our hearts to the love of God; and by maintaining a humble and affectionate trust in his wisdom and paternal goodness.

It was such an attitude as this which sustained our savior in the hours of his agony, and it is only such a spirit which can sustain us, when diseased, forsaken, or dying.

And it will not merely sustain us in this world; for it is this attitude of piety, with the practical habits that arise from it, which will make us ready for a world which suffering and death never enter.

(Adapted from a collection of sermons by Rev. John Emery Abbot, 1829)