#Jesus Is Not "Superman." Better: He's Our Example! #JesusFollowers 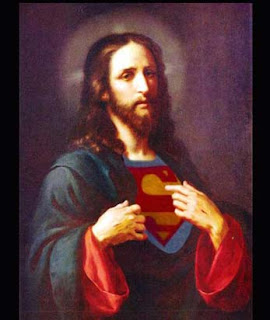 Is Jesus like Superman? And if so, HOW? The answer to that question is actually very important.

Warner Brothers, the makers of the new film, "Man of Steel," are actively promoting the Superman movie to Christian ministers and churches, highlighting the similarities between the "superhero" Superman and the "superhero" Jesus to sell tickets, much like Mel Gibson did in "The Passion of the Christ," a film that had even more references to the real Jesus than Superman did.
In "Man of Steel," Superman reveals that he is 33 years old, traditionally the age Jesus was at the time of his crucifixion. He is shown talking to a priest in a church, with the image of Christ over his shoulder. He is, in a real sense, a "savior of the world," as Jesus has also been portrayed. His father is likened to God (the Father of Jesus) and the adoptive father of Superman alludes to Joseph, say the filmmakers. Superman also appears several times in the film in a "crucifix" stance.
And then there's this: a speech by his long-dead father Jor-El, who tells Superman, "You will give the people an ideal to strive towards. They will race behind you, they will stumble, they will fall. But in time, they will join you in the sun. In time, you will help them accomplish wonders." And he goes on to say, "Every person can be a force of good," and "You can save all of them." (video excerpt, click here)

These words, however, are words far closer to Jesus than these other analogies. But Christendom is closer to the filmmakers in their assessment of Jesus, which is both mistaken and unfortunate.
Interestingly, the author of a RealClearReligion article nailed the "similarities" between Superman and Christendom's Jesus, saying, "In the same way that Christianity trades on the physical vulnerability of Jesus to demonstrate humanity and empathy, the Superman stories where the hero actually gets hurt make it easier to identify with the guy in the tights. It makes us care."
Like Superman in the movies, the Christian mythos (as the author correctly calls it) portrays Jesus as a vulnerable man... but not REALLY a man, since he's (wink, wink) really an alien God who can't REALLY lose. His humanity is all for show - not true in any real sense. Which, of course, is not the case with Jesus.
Jesus is clear about his FULL humanity, and repeatedly subordinates himself to God, saying he can do nothing without God, that God knows things he does not, that he is only relaying the message of God to others, and that he is merely God's servant. He says his God is our God as well, and his Father is also ours.
Jesus tells us we must follow him in obedience to God, that we must obey God and not men, that we must strive towards God's perfection, that we must not sin, and that we will be judged by God according to our actions.
In other words - we must become like Jesus, the Christ, God's Chosen One, and that this Jesus is "an ideal to strive towards." Even though we will "stumble and fall," we can join him in the "sun" of righteousness. That truly is reminiscent of the actual words of our Master, Jesus.
But today's Christianity ("Christendom") does not preach that. It has both a far darker view of humanity and a "Porcelain Doll" attitude towards Jesus, in which we may look towards and worship him, but should never attempt to get too close to him or think much about his actual words.

This error of Post-Nicene Christendom is that their Jesus isn't REALLY someone we can fully emulate. Instead, he, like Superman, is an alien being - someone for whom we must simply wait to come, one day, to solve all of our problems as if by superhuman strength (or magic.) This view prevails, despite his repeated teachings that we must not do any such thing and that we must not view him in this way. This view of Christ is the real "Kryptonite" of Christendom, that it makes Jesus into Superman, a remote alien who is not really one of us. And ultimately, that's a view of Jesus that lacks any hope for the human race.

We should, therefore, "De-Superman" Jesus instead of the other way around. Jesus must be our ideal Human Being, and must be seen as he wished us to see him - as a Godly ideal that can be reached by ALL human beings.

Waiting for Jesus to come back and slaughter our enemies (something he did NOT promise to do) and "throwing our cares" on him rather than doing the hard, but satisfying and Godly work of forgiveness and repentance ourselves, is a backward and desperate way to think about Jesus. And it misses the point of his entire mission.
Jesus is our savior because he calls us to do GOOD WORKS, something Christians recoil from as if it was a venomous cobra rather than the command of a Master. And he summons us to greatness - our "time in the sun" - so that we will help bring God's spiritual Kingdom into existence here and now, on earth, and he dares to tell us that we, too, have the ability to do all the things that he did.

THIS is the Jesus who came to show us we could indeed achieve the Perfection God required of us, and it’s THIS “Superman” who is worthy of following.
Posted by Stephen at 9:30 AM