The Mission of Jesus: To Bring Division 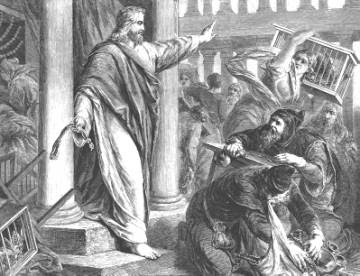 "I came to cast fire on the earth, and would that it were already kindled! I have a baptism to be baptized with, and how great is my distress until it is accomplished! Do you think that I have come to give peace on earth? No, I tell you, but rather division. For from now on in one house there will be five divided, three against two and two against three. They will be divided, father against son and son against father, mother against daughter and daughter against mother, mother-in-law against her daughter-in-law and daughter-in-law against mother-in-law." (Luke 12:49-53)

"Can’t we all just get along?" That was the famous refrain of Rodney King, whose beating by Los Angeles Police officers sparked rioting in 1992.

It’s also the refrain of many who would prefer not to have any controversy or difficulty in their lives, and who hate controversy and conflict, and wish to avoid it at all costs – even at the cost of believing something wrong.

After all, who wants to rock the boat when the water’s not choppy to begin with? Those who question – especially in Christendom’s churches – are seen as troublemakers and malcontents. "Why do they have to raise questions?" they're asked. "Why don't you keep your head down and stay out of trouble?"

It’s the same question Jesus was probably asked. But Jesus came to question, to cause division, and spark controversy. It was only in that way that he would “spark a fire”  that would usher in God’s Kingdom.

Jesus could have become a very popular Pharisee, had he not challenged them and their practices at every opportunity. But instead, Jesus boldly and repeatedly questioned why they were hypocritical in their approach to scripture and religious practices.

He asked why they invented rituals like washing hands and saying prayers that no scripture taught. He vigorously challenged those who were profiting in God’s temple. He questioned those who strung together long, self-centered prayers in public in order to be seen as pious. And he would not tolerate those who wanted to simply sit on the sidelines and not take sides while people compromised their ethics and values, rather than putting them to WORK.

And today, if we follow Jesus and his model, we must look at our religious authorities and again  raise questions, spark controversy, and create division – even if the questions are uncomfortable.

In many Christian churches, the water is indeed smooth as glass when it comes to doctrine, but like in Jesus’ time, the waters need churning, because even most “Protestant” churches unquestioningly accept the Roman Catholic Doctrines supposedly “settled” back in the Fourth and Fifth Centuries, or earlier.

But a doctrine that has been believed for a long time by many people isn't "truth," it's just a long-held, popular belief.

Is Peace-at-any Cost worth it, if we violate our principles? Are we truly following Jesus if we accept man-made doctrines and practices without questioning them, as Jesus did?

Jesus overturned the tables in the temple from which people were profiting from God rather than serving God in humility. Should we remain silent when a “Religion Industry” rakes in hundreds of billions in cash, often preying on the elderly and vulnerable or promising riches and health in exchange for cash?

Jesus taught us to avoid long prayers, or praying for "stuff" like Pagans did, because God knew what we already needed – spiritual treasure that lasted for eternity, not material treasure that rotted and rusted. Should we not challenge with all of our might a false "Gospel of Prosperity" that implies that God will make us rich if we say the right magic words and that we can manipulate Him into giving us material wealth?

Jesus taught us to avoid practices and rituals that had no basis in the Hebrew Scriptures. Should we turn a blind eye to those doctrines taught just because traditionally, they were believed, even if Jesus would not recognize them, or find them actually blasphemous?

Jesus taught us to serve the poor, comfort the widow and others who are afflicted, and to feed and clothe the hungry and naked. Should we pretend that was for another age, and that “works” aren't REALLY required of us, because we have supposedly demanded and obtained the "prize" of eternity from God?

These questions today will create discussion, division and yes, controversy. Isn't that what Jesus requires us to do if we come and follow him? Or are we to put our heads down and remain silent, as Jesus himself refused to do?

Sometimes, long-held doctrines and practices of men must be challenged, and just because they've been unquestioned for a long time and have a lot of clever defense (dreamed up over hundreds of years, repeated by many clever men) doesn't mean that they are correct. Just because Goliath has intimidated others for a long time, so that no one would question him, doesn't mean he must never be confronted by a David.

We must not transgress the commandments of God in order to follow the traditions of men. We are called to challenge doctrines and dogmas despite their seeming age and solidity, and seriously question them, because Jesus is our Master, and his model is the one we must follow.
Posted by Stephen at 7:30 AM