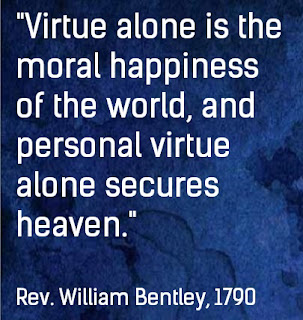 "Not everyone who says to me, 'Lord, Lord,' will enter the kingdom of heaven, but the one who does the will of my Father who is in heaven." (Matt. 7:21)

The ingenuous simplicity which recommends the doctrines and precepts of Jesus Christ forms very pleasing evidence of his plan to reform the world.

Should an impartial stranger consider the history of his religion at its most favorable periods, he could hardly imagine that it had so pure an origin that his simple precepts of life - inspired by a hope of immortality - could produce various and contending sects, who had lost all affection for each other, had neglected the best virtues of life, and had built their hopes of glory on zeal and contention.

Still, the melancholy proof of such conduct have not prevented the belief that nothing could be more benevolent than the character of Jesus.

Everything kind flowed from his lips. He was born in humble life, and never rose in his distinctions beyond what humble life could suggest and comprehend. Affection was recommended in every discourse; points never debated with passion the history of his religion, so offensive to his countrymen, intimated in parables; and every idea of limited salvation was excluded from his heart.

Is it not time to recur to the instructions of this wise friend of mankind, and to accept them uncorrupted by traditions, creeds or councils?

What could he have intended, in saying that many would say, “Lord, Lord?” The words fully explain his intention. He who does the will of my Father, shall be preferred; And the pretensions of such persons are cited in the next verse are considered as in itself unavailing.

Heaven and happiness were not designed by God as the exclusive rights of learned priests, or ingenious doctors; they are the end which God has proposed for all mankind, and are therefore, by the same means, attainable by all men.

Riches and honors cannot ensure the purchase; neither can learning, pompous titles, respect, nor dignity. Virtue alone is the moral happiness of the world, and personal virtue alone secures heaven.