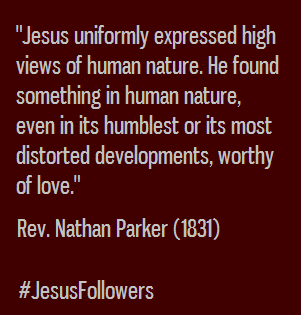 I look to the Reformers, who have appeared in different periods of the Christian church. I see in many of them high powers, determined hearts, and persevering efforts, qualities, which claim for them great respect. I see none, however, unbiased by local interests and prejudices. Jesus stands at an immeasurable distance from them all. I see none, who are actuated by a generous, unmingled love, like that which Jesus manifested.

The power of party has been tried, and so has that of pomp, of show and of boasting, of forms and ceremonies, of fasts and prayers. But has the power of love been uniformly, and extensively tried? Has the true spirit of Jesus ever yet been fully exhibited, either by his ministers or his church? I fear that it has not; and that even some good men are most woefully deceived as to the tendency of their own influence.