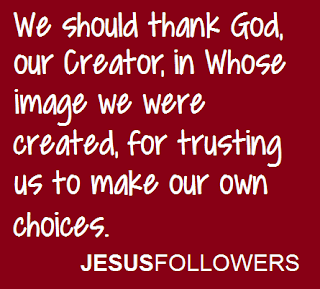 "[Yahweh] didn’t respect Cain and his offering. So Cain was very angry, and the expression on his face fell. And Yahweh said to Cain, "Why are you angry, and why has your face fallen? If you do what is right, will you not be accepted? But if you do not do what is right, sin is crouching at your door. It desires you, but you must rule over it." (Gen. 4:5b-8)

Rather than telling his disciples that we could do nothing EXCEPT sin, Jesus – the one whom God chose as our example and teacher and anointed as His spokesman – taught them, and through them, us, that we are to be "perfect, as your Father in Heaven is perfect." (Matt. 5:48)

In saying this, Jesus echoed all the Hebrew prophets who had come before him - because he did not teach anything new about our ability to obey God that was not already known.

In the Hebrew Scriptures, we are assured that God's commandments are, "not too hard for you," and "The word is very near you. It is in your mouth and in your heart, SO THAT YOU CAN DO IT." (Deut. 30:11, 14) Isaiah writes, "Wash yourselves, make yourself clean. Put away the evil of your doings from before my eyes. Cease to do evil. Learn to do well." (1:16)

"If you choose, you can keep the commandments; and to act faithfully is a matter of your own choice. Set before you are fire and water; to whatever you choose, stretch out your hand. Before everyone are life and death, whichever they choose will be given them." (Sirach 15:15-17)

Therefore, while sin may be waiting by the door for us, seeking to master us, we may indeed defeat – and master – sinful temptations. We HAVE THAT ABILITY, given to us by our Creator!

If we have damaged this ability because of our past behavior, God will grant us greater moral strength when we ask (Psalm 138:3; Prov. 2:6; James 1:5)
That we have this ability born within us is amazingly good news, because it shows that our Creator knows us, and still gives us the freedom to act and choose to obey Him freely!

Through the teachings of our Master, Jesus, we know that God is like a parent, Who allows His children to make mistakes, repent, and turn back to doing what is right and good.

We should thank God, our Creator, in Whose image we were created, for trusting us to make our own choices, and let's pledge to always take that awesome responsibility seriously in all that we do.