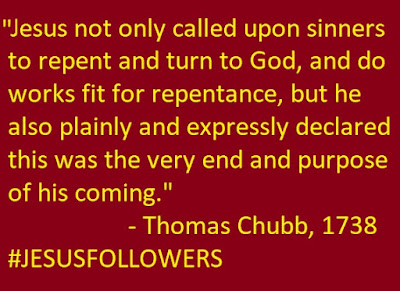 The doctrine of repentance and remission of sin were what Christ Jesus was chiefly concerned to publish to the world; because as humanity was far from conforming their minds and lives to that rule of righteousness which ought to have been the measure of their actions.
Jesus not only called upon sinners to repent and turn to God, and do works fit for repentance, but he also plainly and expressly declared this was the very end and purpose of his coming.
To preach this Gospel, and to preach the doctrines of repentance and remission of sins is for Jesus are the same thing; for what he calls preaching the gospel at one time, he calls preaching the doctrines of repentance and remission of sins at another.
Jesus has pointed out to sinners no other way to the Divine mercy and forgiveness, than the good old way, namely, by repentance and reformation of their evil ways, which always was, and always will be the true and only way for sinners to obtain the divine mercy. This is the way which God by his prophets previously pointed out to the sinful nation of Israel.
Thus Isaiah says: “Wash yourselves, make yourself clean. Put away the evil of your doings from before my eyes. Cease to do evil. Learn to do well. Seek justice. Relieve the oppressed. Judge the fatherless. Plead for the widow.” (Isaiah 1:16-17.) Which is the same as if he had said: though your sins are many and great; yet upon your repentance and reformation they shall be forgiven.
Jesus requires and recommends a conformity of mind and life to that rule of action which is founded in the reason of things, and makes or declares that compliance to be the sole ground of divine acceptance, and the only way to life eternal.
He also laid down some general principles of action, namely, the doing as we would have done to us, the loving of God with all our heart, soul, mind and strength, and the loving our neighbor as ourselves (from general principles, since they are founded in reason.)
And this law o reason is fitly called the law of Christ, as he specially and strictly requires our compliance with it, and declares that compliance to be the sole ground of divine acceptance, in distinction from, and in opposition to that law of ceremonies or positive institutions which Moses had delivered to the Jews, and which therefore was called the law of Moses.
He also represented to us the good and bad consequences which would most certainly attend our compliance, or noncompliance with this law, with regard to the favor or displeasure of God, and their safety or miscarriage in another world.

In his most excellent Sermon on the Mount, after he had shown what attitude and behavior his Disciples and followers ought to put on, and what to avoid; he then represented to them the mighty consequences which depended upon such their attitudes and actions.

“Not everyone who says to me, ‘Lord, Lord,’ will enter into the Kingdom of Heaven; but he who does the will of my Father who is in heaven. Many will tell me in that day, ‘Lord, Lord, didn’t we prophesy in your name, in your name cast out demons, and in your name do many mighty works?’ Then I will tell them, ‘I never knew you. Depart from me, you who work iniquity.’” (Matt. 7:21-24.)

Here we see as great pretensions – professing Jesus, prophesying in his name – this availed nothing; because they were lacking in that which upon their acceptance with God solely depended; namely, conforming their attitudes and actions to the law of righteousness.

By believing in him, it is clear that Jesus did not mean a bare assent to the truth; but he means by it the attending to that message which he was sent to deliver to the world, and the governing our minds and lives according to it.

(Adapted from “The Gospel of Christ Asserted,” by Thomas Chubb, 1738)