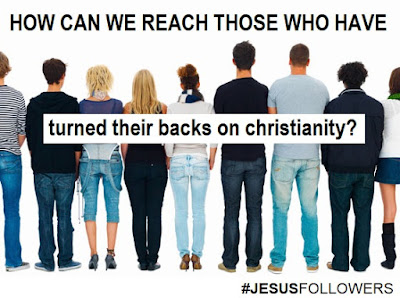 A recent survey found that 81% of Americans believe in God. While that sounds high, it's actually the lowest percentage ever recorded by the survey, which has been taken periodically since 1944. For most of that time, over 90% of Americans believed in God.
The numbers match another disturbing trend. The fastest growing segment of religion in the US are the "Nones." This group isn't a denomination, or even an organized group at all, but they identify with "none" of the organized Christian denominations, traditional or otherwise.

Surveys routinely show that Americans without a religious affiliation (which include 'nothing in particular', agnostic, and atheist), sometimes referred to as "Nones" range around from 21% to 31.4% of the population, with 'nothing in particulars' making up the majority of this demographic. In some states in the US, like New Mexico and New Hampshire, this group consists of up to 49% of the population.

Many have clearly turned their backs on organized religion as a concept, while others are just disgusted with the seeming rejection of science and Reason by people of Faith, and others, sadly, have turned their backs on God as a Being entirely, seeing Christians as well as the God they worship as angry, hypocritical, and judgmental.

Since the early 1990s, independent polls have shown the rapid growth of those without a religious affiliation. A 2018 Barna Group study shows 35% of Generation Z to be Nones.
Many conclusions can be drawn from these statistics, most often is the conclusion that young people simply don't like joining organizations.

But like Mahatma Gandhi, many Nones seem just as likely to be saying, "“I like your Christ, I do not like your Christians. Your Christians are so unlike your Christ." Many conservative Christians have not dared entertain the notion that it's their doctrines that youth and adults alike are rejecting in huge numbers.
The belief that we as humans are born sinful, unable to do any good for ourselves and certainly not able to please God with anything we do with our works, it's good solid Reformation teaching dating back to the 1550s, but doesn't stand up to scrutiny when reading the actual words of Jesus, who grew up steeped in Hebrew scripture learning and was never taught this doctrine, so consequently never taught it to his disciples.

Additionally, youth have always struggled with the Roman Catholic doctrine of the Trinity, which the Reformers accepted without daring to  question it. Yet, the belief formed no part of Jesus' teaching, and he explicitly never mentioned it as something important for us to believe and accept in order to be granted eternal life.
Instead the core of the Gospel books paint Jesus as a human man adopted and specially anointed at baptism by God to perform a mission, a mission which he performed perfectly and called all of us to follow exactly in his footsteps. This actual Gospel of his is not spoken of today by any of his alleged followers who wear robes and call themselves Fathers in ministers.
So, how can we reach the Nones? Why not actually preach the Gospel that Jesus preached to his disciples? Why not preach an active, engaging and life-affirming message that tells us, and them, that all of us are born capable of greatness and are called by Jesus to fulfill that which God created us to become. We have the moral ability to turn back to God and serve and love him fully and completely with all our heart and soul and mind and spirit, in love our neighbor as we love ourselves. This is what Jesus and his gospel calls us to, and it's a winning message in the 21st Century, just as it was in the First Century.
Once unshackled by centuries of false, man-made doctrine, Jesus will become for us all an older brother whom we can actually follow, not a demigod we must simply worship every Sunday in order to gain entrance to heaven.
Posted by Stephen at 9:00 AM