(If you don't know what a "TED Talk" is, they invite "mavericks, icons and geniuses" to give short talks and then share them with the world. - link here. We think this guest would have qualified.)

John Baptiste: Ladies and Gentlemen, it's our pleasure to introduce a man who's a personal friend of mine. Some call him a philosopher, a religious leader and a world-renowned motivational speaker, Joshua de Nazareth. Come on out here, Joshua!

Joshua de Nazareth: "Thank you, John. You're the very best. Thank you all. First I want to recognize my mom and dad in the audience. Where are you? There they are: Joseph and Mary de Nazareth. (applause) I owe it all to you. Thank you. And I see my brothers and sisters are here, too. 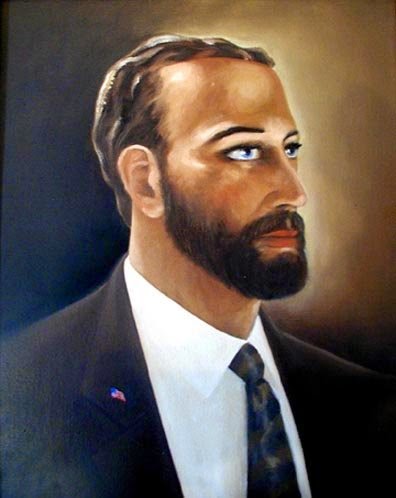 I want to start off with a funny story. When I was just a kid, my parents took me to the City to perform a religious ritual, and halfway back home, they realized their little guy wasn't with them! (laughter) So, haha, so they turned the van around, and when they go back, they asked around and people said "Oh, yeah, he's off studying with the Scholars." So they went and found me talking theology with the religious scholars and I said 'Hey, I'm here in my Father's House. Where did you think I'd be." (laughter, applause)

But that kind of foreshadowed my future ministry and mission with my mentor, Yahweh, who became a second Father to me, and that mission was to spread a Good and Beneficial message first all around my homeland and then around the world, because I think this message is universal, and has universal appeal. (applause)

Years later, John Baptiste here had a Riverside ministry in which he called people to stop doing evil and dedicate themselves to doing Good, and I went down to the river and was washed spiritually in the water and at that very instant, I was Adopted by Yahweh (who's in Heaven) and from then on, I was guided in everything by Him. I was completely dependent on His spiritual presence for every success my subsequent ministry had.

So, I'm often asked to give a shorthand list – seven points – of my personal philosophy. I'm wary of doing such a short presentation of it (because it’s so often misunderstood) but I've got a pretty receptive audience here, so I’ll just climb up on here on this mountainous podium and give it a shot.

1. The key thing is: While many people talked about Yahweh's Righteous Kingdom coming, I proclaimed its arrival at the start of my ministry. It's a great Kingdom, and it's based on spiritual things, not earthly things.

2. If you think the goal of this Kingdom is all about wealth, you're seeking the wrong end-goal. Wealth rots, molds and rusts. The Spiritual wealth we place in the Kingdom lasts forever and can't be taken away.

3. If you think you're going to be first, and invite only the "special people" to the head table, think again. The Kingdom puts the first last and those who are last, it puts first. And if no dignitaries show up, we'll go out and find poor people in rags and sit them down in the best seats. Because that's just what the Kingdom is like. (laughter, applause)

4. The Kingdom is not about taking, it's about giving, and giving freely to others. You are everyone's servant, you're not here to be served. Give even your worst enemies your absolute forgiveness, your time, your effort, your good works and even the shirt off your back. If someone needs help, give it. If they make you walk a mile, do more. If they make you give them your jacket, shed your sweater and shirt too and give it, because they are in need!

5. So, as you can see, it's not about you, it's about others. You'll find yourself when you LOSE yourself in serving others. There was a guy who was broken down on the side of the road and clearly in trouble, but no one would help him. The wealthy drove by in their SUVs, the well-known ministers drive on by, even his own neighbors drove by, all rubber-necking but not helping. Then someone everyone hated pulled over and helped him. Now THAT was a Good Neighbor. We should all be just that good, and not think about who we're helping.

6. Hypocrisy and sanctimonious behavior isn't to be tolerated. Pointing out the mistakes of others is pointless if your mistakes are worse! If you're shouting, stop telling the one who's talking she needs to whisper! If you have mud in your eye, don't try to help others with a few specks of sand in theirs see better! Do Good Deeds, but don't act like you need to be seen doing good just to show off. The Father - who owns the Kingdom - doesn't reward people for doing that.

7. There can't be any violence in the Kingdom. It's not about taking up arms in my name or the name of my Mentor. It's not about overthrowing any governments - hey, your nation's founder may be on the money, give what's due to your nation, but give what's due to the Spiritual Kingdom in your actions and thoughts. Because you signed up for the Kingdom, others are going to resent you, spit on your and even try to kill you. You can't return hate for hate, though. Send only love their way.

What I want to leave you with is this: If I can do it, you can do it, too. I'm a human being of flesh and blood, just like you. Sure, I had Yahweh's Fatherly support and He really worked through me to do all this, but you have access to His spirit, too, and can tap into it any time to strengthen your resolve and help you do the right things. If you mess up, and you will, you need to immediately ask forgiveness (and if you don't give it to others, you won't get forgiven by the Father.) The bottom line? You need to treat others EXACTLY like you want to be treated. And love the Father in Heaven so completely that loving others, including our enemies, comes naturally.

What did my ministry mean, and what does it continue to mean? I started it off by saying that the Father's spirit was upon me, and that he commissioned me to use this ministry to bring Good News to the poor and others in need, and that He sent me out to pardon imprisoned minds and to set those who were oppressed free, and to help those blinded to see again. I preached His Kingdom and nothing else, and while some people didn't get it, or misunderstood what I was saying – and no, I wasn't then and am not now going to form an army and take over the government, or the WORLD! – the message was this: everyone should enter the Kingdom! Now! Don't wait! The poor are going to be taken care of, the brokenhearted will be comforted! The hungry and thirsty will be filled - along with those hungering and thirsting for justice! This is a Kingdom worth LOVING for, and I want everyone to join with me in seeking it.

Thank you. (applause, some boos, some confused.)
Posted by Stephen at 8:14 AM