The Realized Return of Jesus: What really happened in AD 70? 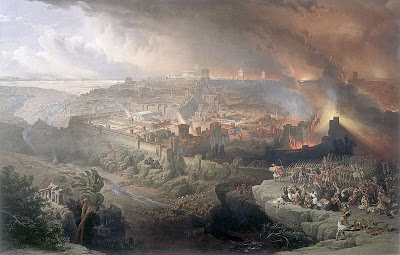 An article in the Sunday, Sept. 8, 2013 USA Today reports that sales of books and novels dealing with prophesy have increased in recent weeks, “since tension in Syria and Egypt escalated.”

In fact, there’s been a decades-long - indeed, centuries-long - craze of seeking “hidden” words and prophesies not only in the Hebrew Scriptures, but in the words of Jesus, starting in earnest in 1844, when the Millerites predicted Jesus Christ would “return” to fetch all the Christians, and physically make war on and obliterate all who opposed him, then set up a 1,000 year reign as King from Jerusalem. This has continued up to our own time, most recently by a fundamentalist minister who made the same claims, and had incorrectly forecast the date several times before.

But has all this been a colossal waste of time – time in which we could have been focusing on building God’s Kingdom on earth, as Jesus himself called us to do, so many centuries ago?

Beginning in April, in the year 70, about 40 years after the Crucifixion of Christ, Jerusalem came under siege from the forces of Roman General Titus, who was the son of Emperor Vespasian. The Second Temple, located in Jerusalem – known as Herod’s Temple – was burnt on August 10, the exact same day and month on which it had been burnt by the king of Babylon, centuries before.

It was the low point of a seven-year war on the Jewish people by Rome, to be ended three years later on the mount of Massada, where thousands of Jewish fighters and civilians committed suicide rather than be taken alive by Romans, who had slaughtered tens of thousands during the Siege of Jerusalem.

Who could have seen this cataclysmic tragedy coming? The answer is Jesus, the Prophet of God. He saw it coming and warned about its coming – exactly a generation before.

Once widely accepted as a fact throughout the Christian world, but now completely missing from the pulpits of Christendom’s churches, the prediction of the fall of Jerusalem and destruction of the Temple by Jesus is one of the most important parts of Jesus’ prophetic ministry, because it proves his warnings and predictions were true and that he was the Prophet of God. But further, it was in fact the “Second Coming” for which millions of hapless Christians even today are waiting.

Jesus clearly preached about the approaching fate of Jerusalem.

When Jesus spoke, echoing the words of the earlier Hebrew prophets, saying, “Truly, I say to you, all these things will come upon this generation. O Jerusalem, Jerusalem, the city that kills the prophets and stones those who are sent to it! How often would I have gathered your children together as a hen gathers her brood under her wings, and you were not willing!’” (Mat 23:36-37) he was clearly passing down God’s judgment upon Jerusalem, and speaking of those who kill the prophets. (And note: This judgment was on THAT generation of Jewish people, NOT to all generations of future Jews, and that’s clear by the context.)

And did he see himself as one of these Prophets? Yes, and that was the point. He said, “I must go on my way today and tomorrow and the day following, for it cannot be that a prophet should perish away from Jerusalem.” (Luke 13:33).”

And listen to what he said about Jerusalem and its fate:

“And when he drew near and saw the city, he wept over it, saying, ‘Would that you, even you, had known on this day the things that make for peace! But now they are hidden from your eyes. For the days will come upon you, when your enemies will set up a barricade around you and surround you and hem you in on every side and tear you down to the ground, you and your children within you. And they will not leave one stone upon another in you, because you did not know the time of your visitation.” (Luke 19:41-44)

This is a clear and vivid portrayal of the destruction of Jerusalem, right down to the “barricade” siege and the Temple being torn to the ground, as it was in AD 70. “As for these things that you see,” he said, “the days will come when there will not be left here one stone upon another that will not be thrown down.” (Luke 21:6)

And he spoke of “wars and rumors of wars” and “nation will rise against nation, and kingdom against kingdom, and there will be famines and earthquakes in various places.” (Matt. 24:6-7) Instead of a future event thousands of years away, this prophesy definitely occurred during the War of AD 67-70.

“Therefore when you see the abomination of desolation, spoken of by Daniel the prophet, stand in the holy place (whoever reads, let him understand).” (Matt 24:15-16) This was fulfilled when Roman soldiers stood inside of the Holy of Holies of the Temple in Jerusalem in AD 70, and stole the relics there, returning them to Rome.

If we believe Jesus, and know that he spoke the truth, we cannot believe that when he said, “THIS GENERATION will NOT PASS AWAY until all these things take place,” (Matt. 24:34) that he was lying, or that he meant that his current “generation” would last for over 2,000 years.

So, did Jesus actually “Return” and did God pass judgment on THAT Generation living in Judea in AD 70? More next week.
Posted by Stephen at 11:13 AM