The Realized Return, Part 2: Let Us Wait Not One More Day 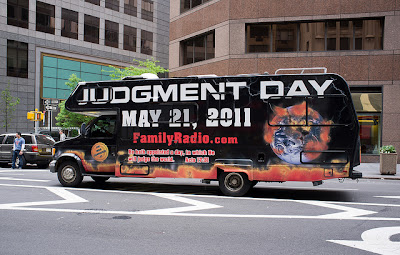 Jesus predicted the destruction of Jerusalem in AD 70, saying, “Then shall be great tribulation, such as was not since the beginning of the world until this time, no, nor ever shall be." (Matt. 24:21.) The writer Josephus, who wrote the definitive account of the Jewish rebellion against Rome, said that "the calamities of all nations from the beginning of the world were exceeded by those which befell his countrymen on this occasion." (Wars of the Jews, 1:1)

But is all this also signaling the Second Coming, of which he speaks? If we believe his words, it must. All scripture referring to the “End Times” refer to the mass persecution of Christians under Nero and the Jewish Revolt against Rome (AD 64-70) which culminated in the destruction of the Temple.

If Jesus was predicting his return in the 21st Century, or later, then he clearly was a liar and a false prophet, since he promised to return within the lives of the his hearers’ generation – a generation to Jews always meaning 40 years.

Jesus said about these events, “concerning that day and hour no one knows, not even the angels of heaven, nor the Son, but the Father only.” (Matt. 24:36) But he did know that “THIS GENERATION will NOT PASS AWAY until all these things take place.” (Matt. 24:34) And, “there are some standing here who will not taste death until they see the Son of Man coming in his kingdom” (Matt. 16.28)

Now, was Jesus joking with and teasing those standing there in front of him? Or did he mean to imply that some people standing there with him around the year AD 33 would still be waiting for his return in the year AD 2020? Clearly not. But no less than the popular Christian writer C.S. Lewis said Jesus was “wrong” about his “this generation” prediction, saying of Jesus, “He clearly knew no more about the end of the world than anyone else,” and called it the “most embarrassing verse in the Bible.”

But Jesus was not wrong. In fact, Jerusalem (though not “the world,” which Jesus never said would be destroyed) was devastated a mere 37 years after his crucifixion, and destroyed in the same horrific manner as he predicted, when he predicted it would happen.

“For as the lightning comes out of the east and shines even to the west, so also will be the coming of the Son of Man.” (Matt. 24:27) Roman armies actually entered Jerusalem from the East in AD 70, and judgment indeed came upon it. And the Age of the Second Temple ended.

(And those who appeal to the Book of Revelation in an attempt to show a future return of Jesus are out of luck. The book, believed by many scholars to have been written BEFORE the Jewish Wars began, clearly alludes to the Roman emperor Nero (d. 64 the “666” is a numerological allusion to his name) and repeatedly said of the book’s prophesies, “The time is NEAR.” The angel dictating to the author of the book said, “Do not seal up the words of the prophecy of this book, for the time is near.” Contrast these instructions with those of Daniel 12:4. In Daniel the time was far off, and it was to be sealed. But in Revelations, it’s said to be near.)

Many, many more examples can be offered to prove the point of Jesus’ accurate prediction of the end of an Age in AD 70, and again, this was clearly known to pastors and wise Bible students just a century ago. So, what does this all mean for those still waiting for Jesus’ prophesies to be fulfilled?

Many continue to wait for a terrifying military Messiah to come and kill all of God’s enemies and instantly set up a Kingdom by force of arms. As we’ve discussed before, that is not the Messiah Jesus said he was, and people have been upset about this ever since he first entered Jerusalem. It’s simply not the way Jesus himself said that God’s Spiritual Kingdom would be inaugurated on the Earth.

A Jesus who arrived once, during his ministry, and predicted God’s judgment of Israel – in a manner no less powerful than was predicted by Jeremiah and the other prophets of old had done – is an inconvenient Jesus for many in Modern Christendom, who have created elaborate fantasies about the “End Times,” a modern “Beast” (who has a different name in each passing generation) and a Jesus who will come and slaughter everyone who doesn’t believe in him. But that’s simply a fantasy that we must abandon.

Jesus has come! He is the True Prophet of God, and has left us a Good and Beneficial Message (the Gospel) by which we may be saved and live our lives in accordance with God’s will. And he has left us a perfect template in his holy, human life and death that we may know it can be accomplished by all humanity. Thanks be to God, that we need not wait ONE MORE DAY to do Good Works in His holy name and bring in God’s Kingdom!
Posted by Stephen at 9:00 AM