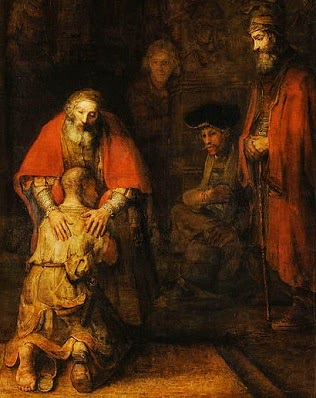 In the Parable of the Prodigal Son, Jesus teaches us that we are to rejoice and be accepting of those among us who return after wronging us. The parable also teaches us that God is ready and waiting for those who return to the path of righteousness.

In the parable, a son asks for his inheritance early and goes away, only to squander it on lustful living. He exhausts his money and returns to his father's house, seeking a job as a servant. But the father, even before he reaches his gate, runs out to greet him, and immediately forgiving him, prepares a feast for him.

In this way, Jesus teaches us to endlessly and without hesitation forgive others, in the same way God forgives those who return to him in repentance. When asked how many times we must forgive others, Jesus said "70 times 7 times."

Our repentance for our sins - just as the boy who return to his father - satisfies any Justice God requires for transgressing his moral Law, because God is not a monster, but a loving Parent who wants us to live in peace with Him and with our fellow human beings.

Mercy is given by God to those who ask for forgiveness and accept it. That's the contract; that's the "price" to be paid, just as the price the Prodigal Son paid was returning to his father in humility.

The first and most solemn declaration of God to Moses (Exodus 34:6-7) is that of "God, merciful and gracious, long-suffering - forgiving iniquity, transgression and sin." David constantly prays for the pardon of sin, for God's "mercy's sake," (Psalms 44:26) and finds forgiveness for his sins upon repentance, living thereafter with "clean hands" before God (2 Samuel 22:21.) In the story of Jonah, that God is shown to be merciful to Nineveh if only they repented from their sins (Jonah 4:1.)

But the way Forgiveness, Justice and Mercy are understood by many Christians would force us to radically re-tell the parable, because, like Jonah, some Christians are very angry that God so easily forgives.

Seeking inspiration not from Jesus' teachings, but from angry medieval lawyers and kings, they create a doctrine of God's Justice the enemy of God's Mercy in which God CANNOT simply forgive without a blood sacrifice - someone MUST pay the "price" for a sin. But God's mercy isn't the enemy of God's forgiveness. Both exist in equal measure in the heart of our loving God.

In their telling of the story, the Prodigal Son's vengeful father would have stopped the boy at his gates and then demanded that his eldest son be slaughtered in order to satisfy the sins of the youngest who sinned against his father. Only then, when the elder son's blood was spilled, would the payment be accepted.

This may have been a perfectly reasonable way to achieve justice in the ancient world, but if we put our belief solely in Jesus' teachings, and not in other mens', we know that this is not how God shows Mercy OR Justice.  While we may decide that some people do not deserve God's mercy, and must first "pay a price" for falling short of His high standards, God does not condemn based on our whims or theories about who is "in" and who is "out" of his loving embrace, either now or eternally.

In the parable, even when the son "was yet a great way off," the father ran to meet him, and "fell upon his neck and kissed him" (Luke 15:20.) When Jesus calls us to forgive others as God has forgiven us, does that mean we have a duty to exact a blood payment from those whom WE wish to forgive? The opposite is true. We must forgive 70x7 times, joyfully and without hesitation.

God cannot be held to our human standards of how Justice and Mercy should work. And we should be extremely grateful for that.
Posted by Stephen at 8:30 AM